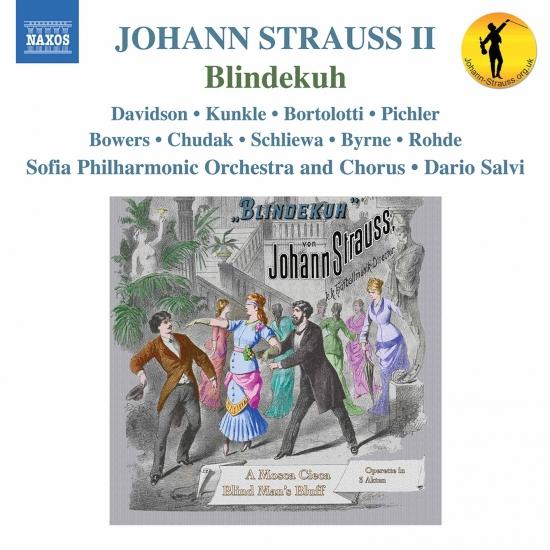 Blindekuh (‘Blind Man’s Buff’) was Johann Strauss II’s sixth operetta and his least known. Neglected for well over a century, it was revived by Dario Salvi and the forces on this album in January 2019. The work’s initial lack of success is hard to explain but it may have been caused by a confusing libretto—the music itself is vibrant and captivating with waltzes, polkas, mazurkas, marches and bel canto arias. Performed in a concert version without dialogue, and in accordance with performing traditions, this production restores the work to the status of one of Strauss’s most melodically seductive works.
History would tell us that the younger Johann Strauss composed three of the world’s most popular operettas together with a sizeable catalogue of total failures.
"There has been the easy explanation that he chose his libretti foolishly as he had no theatrical instincts, which is only partially true, though the 1878 score for Blindekuh, with its reliance on a most improbable series of mistaken identities, is musically very attractive It was a quite extended work that had just 16 performances in Vienna and several in Hungary before it descended into total oblivion. So now with many thanks to the musicologist and conductor, Dario Salvi, 140 years later we have its first revival in modern times with a concert version presented in the Bulgarian city of Sofia in January 2019. Omitting the dialogue, but included all of the music, it takes up two well-filled CDs, Strauss having lavished a profusion of pleasing vocal passages and catchy dance episodes, some of them recycled in his later works. I am not going to try to unravel the story where Waldine, the young daughter of a wealthy land owner, is waiting to meet the young man to whom she has been promised in marriage, but has never seen. He is now about to arrive from his native America, and you can begin to guess the confusion that can follow, particularly when a game of Blindekuh (Bind Man’s Buff) is introduced for the guests in the second act party. I guess it was even more difficult to unravel in the original theatre presentation as identities kept on changing, The cast in Sofia was international with the nine singers for the solo roles arriving from the United States, Germany, England, Italy and Austria, but they perform with an instinctive feel for the Viennese operetta tradition. Maybe Dario Salvi could have added a notch more momentum to the overture, but the Sofia orchestra and chorus respond admirably to his conducting. The sound quality in this ‘live’ recording is well balanced between orchestra and chorus, and as your critic began his record reviewing career, very many decades ago, with a disc of Johann Strauss, I am delighted to commend this World Premiere release to you." (David’s Review Corner)
Robert Davidson, bass-baritone
Kirsten C. Kunkle, soprano
Boyan Vasilev, tenor
Peter Petrov, bass
Snezhina Kumanova, contralto
Julian Rohde, tenor
Martina Bortolotti, soprano
Emily K. Byrne, mezzo-soprano
Roman Pichler, tenor
Daniel Schliewa, tenor
James Bowers, tenor
Andrea Chudak, soprano
Sofia Philharmonic Orchestra
Sofia Philharmonic Chorus
Dario Salvi, conductor 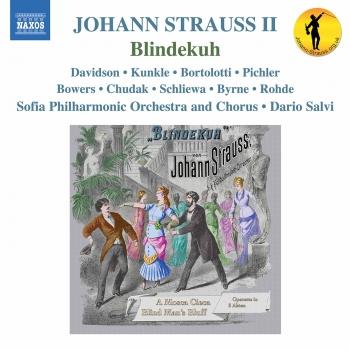