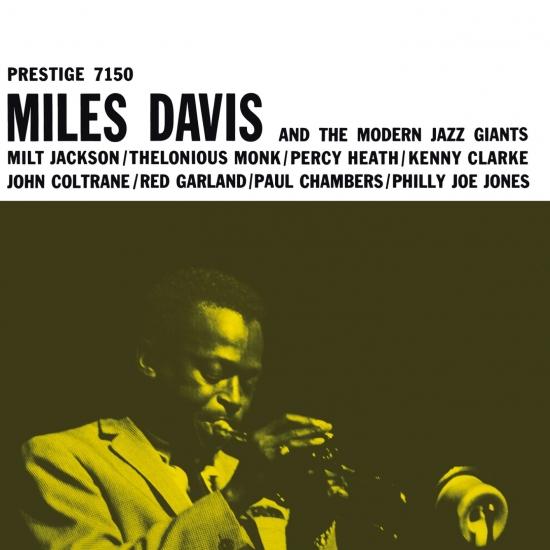 Miles Davis and the Modern Jazz Giants make a formidable team, enjoyed by fans in New York and San Francisco as well as in countless places in between end beyond. The team itself is a potent mixture of the top modern jazz veterans of the Forties and Fifties and more recently established stars of the Fifties.
Although modern jazz has only been with us since the early Forties, the standouts of the era are already clearly indicated and I doubt whether further jazz history will dull their lustre. A great jazz performance is always within a certain tradition and a timeless thing regardless of the era in which it was played. Some critics of jazz say that it may well be a transient thing and that we must wait centuries to see if it survives with a validity like Bach and Beethoven have in their idiom. Without going in to why I would disagree with this, I would say that the next two centuries are likely to move twice as quickly in terms of cultural evolution as the two centuries which preceded them and the position of all music, as we know it, may be very different than its present one. All we can draw from in judging the relative merits of a jazz performance is our listening experience within the idiom. …
„Including sessions recorded the same day as those on Bags Groove, this album includes more classic performances from the date that matched together trumpeter Miles Davis, vibraphonist Milt Jackson, pianist Thelonious Monk, bassist Percy Heath, and drummer Kenny Clarke. Davis and Monk actually did not get along all that well, and the trumpeter did not want Monk playing behind his solos. Still, a great deal of brilliant music occurred on the day of their encounter, including "The Man I Love," "Bemsha Swing," and "Swing Spring." (Scott Yanow, AMG)
Miles Davis, trumpet
Milt Jackson, vibraphone
Thelonious Monk, piano
Percy Heath, bass
Kenny Clarke, drums
Miles Davis, trumpet (on Round Midnight)
John Coltrane, tenor saxophone (on Round Midnight)
Red Garland, piano (on Round Midnight)
Paul Chambers, bass (on Round Midnight)
Philly Joe Jones, drums (on Round Midnight)
Recorded December 24, 1954 and October 26, 1956 at Van Gelder Studio, Hackensack
Produced by Bob Weinstock
Digitally remastered