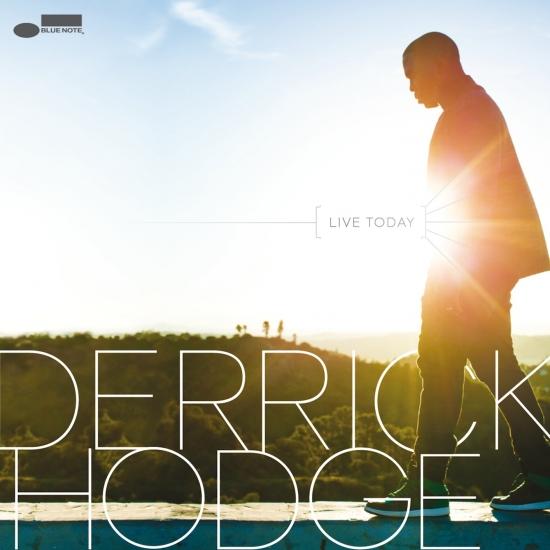 Derrick Hodge’s debut recording 'Live Today' is a showcase of his widely respected versatility and melodic sensitivity, creating a unique sound all his own. Hodge represents something inventive and refreshing, fronting the wave of a unique generation of renaissance musicians working across all genres without borders. This release is a mosaic composed of what is now and where he comes from, representing the new and respecting the classic. His music creeps into the soul and flirts with the imagination, leaving an unforgettable mark.
Hodge is perhaps best known as the anchor of the genre-bending, GRAMMY award-winning band Robert Glasper Experiment, but he has also spent time in the cutting-edge jazz trumpeter Terence Blanchard’s group, and is currently the music director for the R&B star Maxwell. Hodge brings all his experience as a soloist, bandleader, and composer to the fore on this impressive debut.
“This whole album was about putting on a composer’s hat, but also letting go and making sure that I’m giving people raw examples of how I feel on any given day,” Hodge explains. Live Today weaves together a distinctive musical vision from 14 stylistically diverse originals either written or co-written by Hodge that traverse modern jazz, hip-hop, R&B, gospel, and acoustic folk. The album features guest appearances from rapper Common, singer-guitarist Alan Hampton, as well as RGE members Robert Glasper, vocoderist Casey Benjamin, and drummers Marc Colenburg and Chris Dave, in addition to keyboardists James Poyser and Aaron Parks, saxophonist Marcus Strickland, trumpeter Keyon Harrold, and the American String Quartet, among others.
The title track provides the most explicit articulation of the album’s overall theme, thanks to Common’s conversational rhymes. After playing on three of Common’s albums – Be, Finding Forever, and The Dreamer/The Believer – it was befitting for Hodge to invite the MC on the album. “I really respect Common as an artist and as a person,” Hodge says, “When we first were conceptualizing this album, I knew from the jump that I wanted Common on it. I'm honored that he agreed to collab with me.”
Derrick Hodge, bass/composer
Alan Hampton, guitar, vocals
Robert Glasper, guitar
Casey Benjamin, saxophone/vocoder
Mark Colenburg, drums
Chris Dave, drums
Common, vocals
James Poyser, keyboards
Aaron Parks, saxophone
Marcus Strickland, saxophone
Keyon Harrold, trumpet
American String Quartet

Derrick Hodge
has spent his youthful career transcending between various styles of Hip-Hop, Gospel, R&B, Funk, Singer/ Songwriter, and Jazz, performing and/or recording with an impressive roster of GRAMMY® nominated and awarded artists including Maxwell, Common, Q-Tip, Mos Def, Timbaland, Jill Scott, Musiq Soulchild, Bilal, Gerald Levert, Kanye West, Andre 3000, Sade, Terence Blanchard, Mulgrew Miller, Clark Terry, Donald Byrd, and many more.
In 2008, he was commissioned to write a piece by the Chicago Symphony entitled “Infinite Reflections”, and was selected to be a part of the Sundance Composer Lab. Hodge currently performs as a solo artist in front of sold out crowds at diverse venues including Summerstage and Blue Note Jazz Club, maintains a steady career as a film composer, and serves as the Musical Director for Maxwell.
“Live Today is the way I chose to begin my story as a solo artist. It is a melting pot of sound and emotions, and is how I decided to capture my thoughts at that moment in time. There were many directions that this record could have went, but I chose to give people what was on my mind in a very raw, unedited way. Live Today is about acceptance, being in the moment while paying respect to those that came before me, and about writing music that feels good to me.” (Derrick Hodge)