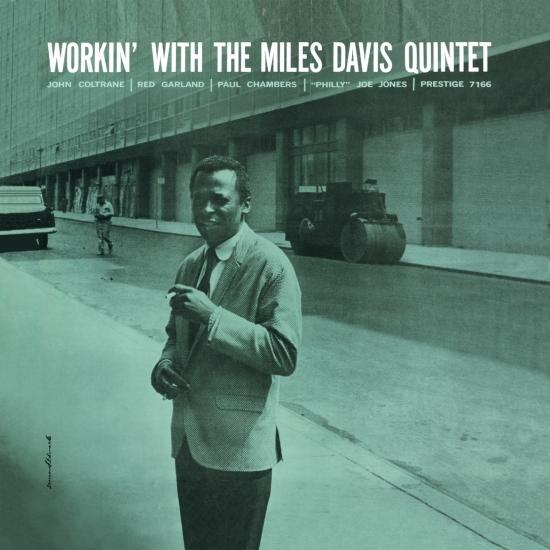 Workin' is notable for the bittersweet reverie of "It Never Entered My Mind," one of the most beautiful ballads Miles ever recorded. Red Garland's rippling second theme and bell-like intermezzo set off Miles' muted melody in sharp relief; Miles' poignant, breathy timbre and weightless phrasing is sheer poetry.
But Workin' plumbs a variety of moods and grooves. Philly Joe Jones' dancing polyrhythms set the mood for Miles' famous lines "Four" and "Half Nelson." By now, Miles' work with the open horn is a product of his own aesthetic, distinguished by a thoughtful use of space, meticulous note placement and a variety of expressive brass shadings. By editing the more technocratic aspects of his line, Miles has arrived at a lighter, cooler, more personal style of phrasing. And now even the relentlessly forceful Coltrane exhibits greater patience and melodic focus.
Musical treats abound. There are two delightful takes of Miles' coy, bluesy trademark "The Theme" and a funky statement of "Trane's Blues" (aka "Vierd Blues"). "Ahmad's Blues" is a low-down, after-hours feature for pianist Red Garland (who is not often accorded the credit he deserves for developing this cosmopolitan lyric style), featuring Paul Chambers' remarkable bow work. A perfect jazz band.
„Workin' is the third in a series of four featuring the classic Miles Davis Quintet: Davis (trumpet), John Coltrane (tenor sax), Red Garland (piano), and Philly Joe Jones (drums). Like its predecessors Cookin' and Relaxin', Workin' is the product of not one -- as mythology would claim -- but two massively productive recording sessions in May and October of 1956, respectively. Contradicting the standard methodology of preparing fresh material for upcoming albums, Davis and company used their far more intimate knowledge of the tunes the quintet was performing live to inform their studio recordings. As was often the case with Davis, the antithesis of the norm is the rule. Armed with some staggering original compositions, pop standards, show tunes, and the occasional jazz cover, Workin' is the quintessence of group participation. Davis, as well as Coltrane, actually contributes compositions as well as mesmerizing performances to the album. The band's interaction on "Four" extends the assertion that suggests this quintet plays with the consistency of a single, albeit ten-armed, musician. One needs listen no further than the stream of solos from Davis, Coltrane, Garland, and Jones, with Paul Chambers chasing along with his rhythmic metronome. Beneath the smouldering bop of "Trane's Blues" are some challenging chord progressions that are tossed from musician to musician with deceptive ease. Chambers' solo stands as one of his defining contributions to this band. In sly acknowledgement to the live shows from which these studio recording sessions were inspired, Davis concludes both sets (read: album sides) with "The Theme" -- a brief and mostly improvised tune -- indicating to patrons that the tab must be settled. In this case, settling the tab might include checking out Steamin', the final Miles Davis Quintet recording to have been culled from these historic sessions.“ (Lindsay Planer, AMG)
Miles Davis, trumpet
John Coltrane, tenor saxophone
Red Garland, piano
Paul Chambers, bass, cello
Philly Joe Jones, drums
Recorded May 11 and October 26, 1956 at Rudy Van Gelder Studio, Hackensack, New Jersey
Produced by Bob Weinstock
Digitally remastered