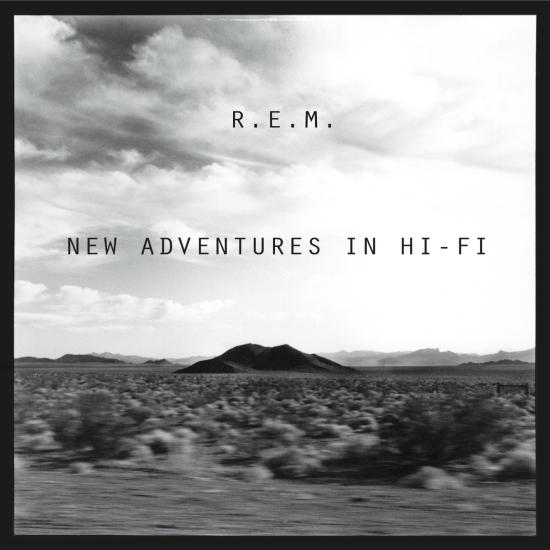 After finishing the Monster tour with a huge quantity of newly written material, R.E.M. quickly began the task of transforming it into an album. The result is New Adventures In Hi-Fi, the most dramatic and wide-ranging musical statement the group have ever made. The 14 songs range from hushed acoustic to full-on electric, from studio recordings in Seattle to an acoustic jam in a Philadelphia bathroom. Both spontaneous-sounding and intensely focused, the album represents the band at the pinnacle of their creative powers.
„Recorded during and immediately following R.E.M.'s disaster-prone Monster tour, New Adventures in Hi-Fi feels like it was recorded on the road. Not only are all of Michael Stipe's lyrics on the album about moving or travel, the sound is ragged and varied, pieced together from tapes recorded at shows, soundtracks, and studios, giving it a loose, careening charm. New Adventures has the same spirit of much of R.E.M.'s IRS records, but don't take the title of New Adventures in Hi-Fi lightly -- R.E.M. tries different textures and new studio tricks. 'How the West Was Won and Where It Got Us' opens the album with a rolling, vaguely hip-hop drum beat and slowly adds on jazzily dissonant piano. 'E-Bow the Letter' starts out as an updated version of 'Country Feedback,' then it turns in on itself with layers of moaning guitar effects and Patti Smith's haunting backing vocals. Clocking in at seven minutes, 'Leave' is the longest track R.E.M. has yet recorded and it's one of their strangest and best -- an affecting minor-key dirge with a howling, siren-like feedback loop that runs throughout the entire song. Elsewhere, R.E.M. tread standard territory: 'Electrolite' is a lovely piano-based ballad, 'Departure' rocks like a Document outtake, the chiming opening riff of 'Bittersweet Me' sounds like it was written in 1985, 'New Test Leper' is gently winding folk-rock, and 'The Wake-Up Bomb' and 'Undertow' rock like the Monster outtakes they are. New Adventures in Hi-Fi may run a little too long -- it clocks in at 62 minutes, by far the longest album R.E.M. has ever released -- yet in its multifaceted sprawl, they wound up with one of their best records of the '90s.“ (Stephen Thomas Erlewine, AMG)
Bill Berry, drums, percussion
Peter Buck, guitar, mandolin, bouzouki, bass
Mike Mills, bass, piano, backing vocals, synthesizer, organ
Michael Stipe, vocals, synthesizer
Nathan December, guitar
Scott McCaughey, ARP Odyssey synthesizer, paino
Mike Mills, fuzz bass, backing vocals, Farfisa organ
Patti Smith, vocals
Recorded 1995–1996 at Recorded at Bad Animals, Seattle
Additional recording & mixing at John Keane Studio, Athens and Louie's Clubhouse, Los Angeles
Tracks 1, 3, 5, 9 recorded at Seattle Studio • Track 2 recorded in Charleston
Track 4 recorded in Boston - Tracks 6, 13 recorded in Atlanta soundcheck
Track 7 recorded in Detroit - Track 8 recorded in Memphis soundcheck
Track 10 recorded in Phoenix - Track 11 recorded in Philadelphia dressing room
Track 12 recorded in Orlando soundcheck - Track 14 recorded in Phoenix soundcheck
Mastered at Gateway Mastering
Produced by Scott Litt, R.E.M.
Digitally remastered