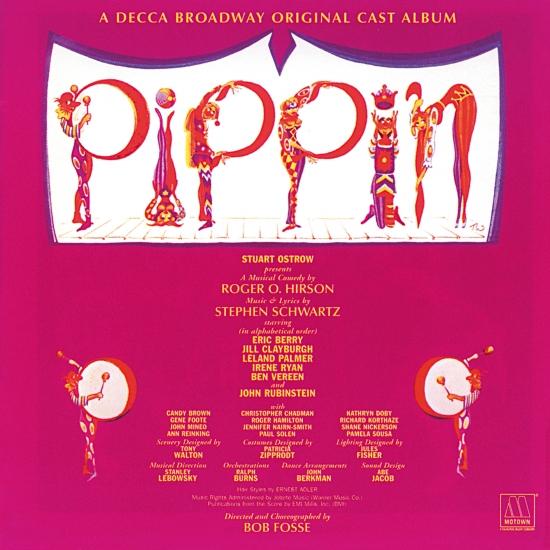 One of the best-selling Broadway cast albums of the '70s, featuring Ben Vereen and Irene Ryan! This 1972 recording was Motown's first venture into Broadway; this reissue includes three bonus Pippin covers: the Jackson 5's hit version of Corner of the Sky ; the Supremes' hit version of I Guess I'll Miss the Man , and Michael Jackson's recording of Morning Glow!
A young man graduates from college and wonders how to find real meaning in his life. What's an heir to the 9th-century Holy Roman Empire to do? If you're Pippin, son of Charlemagne, you decide to dabble in war, sex, and politics before finally finding love. When Bob Fosse directed the original Broadway production of Pippin in 1972, he transformed what had originally been a relatively innocent college project for composer-lyricist Stephen Schwartz into a burlesque filled with broad comedy, bawdy characters, and magical but dark situations. John Rubinstein (best known for his TV work and son of pianist Artur) plays the title character, and Ben Vereen kick-started his career (and won a Tony) as the narrator figure known as the Leading Player. Schwartz's combination of Godspell-like ensemble energy with various pop-rock styles makes for a snappy, tuneful score, including the soul-driven opener 'Magic to Do,' the soaring 'Corner of the Sky,' the lovely ballads 'With You' and 'Love Song,' and the romping 'No Time at All' (delivered with saucy conviction by The Beverly Hillbillies' Irene Ryan as Pippin's grandmother).
While the original album release was somewhat notorious for its lack of liner notes, the 2000 remastered release includes an essay on the show's creation, a detailed synopsis, and full lyrics, as well as three bonus tracks. Pippin was originally released on the Motown label, so some of its songs were cross-promoted by Motown stars: The Supremes deliver a conventional take on the gentle 'I Guess I'll Miss the Man,' the Jackson 5 deliver a blast of high-pop energy to 'Corner of the Sky,' and Michael Jackson solos on 'Morning Glow.' (David Horiuchi)
Ben Vereen (Leading Player)
John Rubenstein (Pippin)
Jill Clayburgh (Catherine)
Eric Berry (Charlemagne)
Leland Palmer (Fastrada)
Irene Ryan (Berthe)
Edward Strauss, piano solos
Stanley Lebowsky, conductor
Directed and choreographed by Bob Fosse
Produced by Bob Gaudio, Phil Ramone, Deke Richards, Stephen Schwartz
Digitally remastered
NOMINATED FOR 11 TONY AWARDS IN 1973, WINNER OF FIVE
Best Performance by a Leading Actor in a Musical - Ben Vereen
Best Direction of a Musical - Bob Fosse
Best Choreography - Bob Fosse
Best Scenic Design
Best Lighting Design