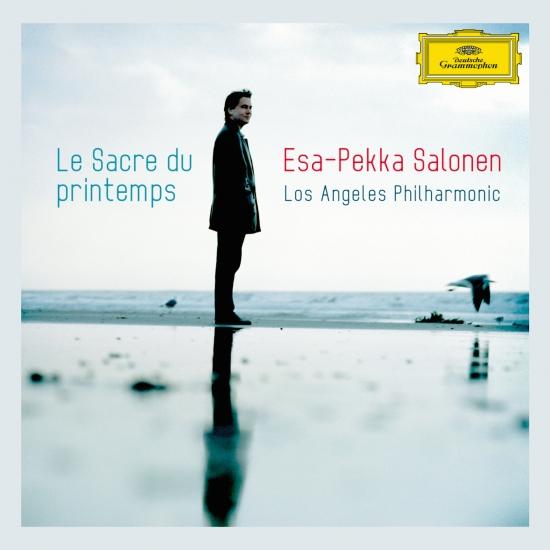 This Deutsche Grammophon disc, Le Sacre du Printemps -- Los Angeles Philharmonic, is issued to celebrate the opening of L.A.'s new concert venue, the Walt Disney Concert Hall. The Disney is one of the most controversial structures to go into in the ground in the twenty first century, a twisted, semi-abstract edifice made of polished stainless steel and occupying 293,000 square feet with a seven-level parking lot below.
Critics of the Frank Gehry-devised concert hall cum artwork ridiculed it as maximum ugly and overly expensive, and city leaders wondered if the inordinately bright building would need to be sandblasted so as not to blind pilots of commercial jet liners passing overhead. Although Esa-Pekka Salonen has made a number of successful recordings with the Los Angeles Philharmonic for both Sony Classical and Deutsche Grammophon, they have either recorded them out of town or in UCLA's Royce Hall, as the other large concert venue in town, the Dorothy Chandler Pavilion, simply isn't a good venue for recording an orchestra. Disney Concert Hall was, in part, designed with that in mind.
Comparatively, a 1964 RCA Victor LP commemorating the Chandler's opening appeared within mere days of the main event, and in some quarters is valued as a keepsake. Nevertheless, the prognosis is good for the sound of Disney Concert Hall as a venue for recording the Los Angeles Philharmonic at home. The recording of Mussorgsky's 'Night on Bald Mountain' is truly wonderful stuff, as every measure of Mussorgsky's clotted and knotty but fearlessly innovative original orchestration is heard here in glassine detail. Percussion strokes are precise, the rendering of brass and wind has an almost photographic quality, and strings are heard as a wave of sound rather than as a mushy tangle of wire. This is one of the most stunningly realistic recordings ever made of a symphony orchestra. The Bartók 'Miraculous Mandarin' in its concert version is new to Salonen's recorded repertoire, and while it is a good performance, it's a little cold, which reflects Salonen's usual M.O. with Bartók. In this rendering of Stravinsky's 'Le Sacre du printemps,' Salonen is far more individual in his handling of the score and its effects, and the sound of Disney Hall almost seems to project 'Le sacre''s extremes. Salonen delivers a performance that is far from the pristine, note-perfect recording by Pierre Boulez, closer in spirit to that of Igor Markevitch. Salonen's rendering of the Stravinsky may not please all who hear it, but this is one of only a few orchestral discs in perhaps 25 years that is an imperative just by virtue of the sonic reproduction of the orchestra alone. Le Sacre du Printemps -- Los Angeles Philharmonic is provocative and intense and will give any decent home system a serious workout; like Disney Hall itself, it is a miracle of engineering. (Uncle Dave Lewis, AMG)
„Salonen and his orchestra play with astonishing lucidity and care. Rarely have the various pieces of the music's motivic mosaic sounded out quite so clearly as they do here; rarely have the rhythms been etched with such exactitude; rarely have the instrumental timbres been so easy to distinguish, even in the most congested climaxes. If you're looking for accuracy, you can't do much better than this.“ (Peter J. Rabinowitz, International Record Review)
“I'm not sure… that I've ever heard so much of the Rite's instrumental detail revealed so intricately: the interweaving woodwind of the introduction are exquisitely, indeed eerily sifted, and even in the biggest climaxes there is unusual clarity of texture. The couplings are also attractive - swirling, intermittently thunderous renditions of Musorgsky's original version of Night on the Bare Mountain and the concert suite from Bartók's Miraculous Mandarin ballet...” (BBC Music Magazine)
„In this vivid, window-rattling live recording, Esa-Pekka Salonen leads a big-boned but fluid account of „Le Sacre,“ long one of his signature pieces, as well as a magnificently visceral reading of ¿Night on Bald Mountain,¿ in its original scoring, and a rich-hued, earthy performance of Bartok¿s ¿Miraculous Mandarin.¿ If you want to know why the Los Angeles Philharmonic is so highly regarded, here is the place to begin.“ (Allan Kozinn, The New York Times)
Los Angeles Philharmonic Orchestra
Esa-Pekka Salonen, conductor
Recorded at Los Angeles, CA, Walt Disney Concert Hall, 1/2006
Recording Producer: Sid McLauchlan
Tonmeister (Balance Engineer): Rainer Maillard
Recording Engineer: Fred Vogler
Project Coordinator: Matthias Spindler
Recorded, edited and mastered by Emil Berliner Studios
Produced by Valérie Gross