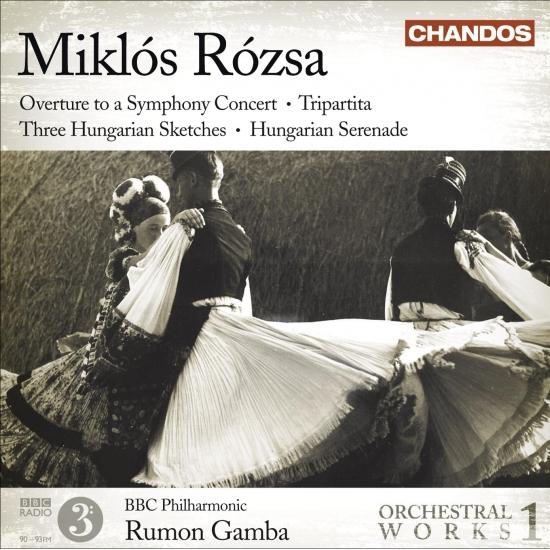 Rumon Gamba and the BBC Philharmonic here embark on a new orchestral series with music by Miklós Rózsa.
Rumon Gamba says of the project: ‘Having made many album of the film music by composers whose concert works is well known, for example, Arnold and Vaughan Williams, I thought it would be interesting to look at a very well-known film composer and profile his concert works, which have perhaps been overshadowed by his big-screen successes. The orchestral music of Miklós Rózsa is extremely exciting, passionate and intoxicating, and deserves to be better known.’
Rózsa is one of the giants of the film world, with scores for Ben Hur, Quo Vadis and El Cid to name but a few. Gamba continues, ‘I expect fans of early twentieth-century classical music in general and of the big Hollywood scores alike will find this music arresting and intensely beautiful’.
Despite his many Hollywood film commitments, the composer always made time to write the music that was most important to him, that for the concert hall. Once settled in Hollywood, Rózsa was able to negotiate a beneficial contract which allowed him to spend the summer months writing his serious music at his Italian retreat, and the winter months in Hollywood composing music for films. The four works recorded on this first volume offer a strong impression of his concert style, one which the leading conductors of the day held in high regard. The ebullient Three Hungarian Sketches was the official Hungarian entry at the International Music Festival in Baden-Baden in 1938. The large late Tripartitia, composed in 1971, has an earthy quality but exudes also in places an evocative nocturnal mood. It is complemented by two works in a lighter vein, the Overture to a Symphony Concert and the Hungarian Serenade.
Rózsa developed a unique musical voice highly influenced by his Hungarian roots, and his works often dazzle with virtuosity. The BBC Philharmonic pull out all the stops to play these works with the precision and passion they require. This is the launch of a very special project for Chandos.
“Rózsa's Hungarian roots… were …expressed… in the Overture to a Symphony Concert… a bright and positive score which would grace any concert programme. Most impressive of all is the Tripartitia (1971, rev 1972), its constituent Intrada, Intermezzo and rather Waltonian Finale showing Rózsa developing in a new direction late in his career. Excellent performances and superlative sound...” (GRAMOPHONE)
Rozsa: Three Hungarian Sketches, Op. 14 Hungarian Serenade, Op. 25 Overture to a Symphony Concert, Op. 26a Tripartita, Op. 33
BBC Philharmonic
Rumon Gamba
Miklos Rozsa: Overture to a Symphony Concert, Op. 26a (revised version)
Overture to a Symphony Concert, Op. 26a (revised version)
Miklos Rozsa: 3 Hungarian Sketches, Op. 14a
I. Capriccio
II. Pastorale
III. Danza
Miklos Rozsa: Tripartita, Op. 33
I. Intrada
II. Intermezzo arioso
III. Finale: Allegro con brio
Miklos Rozsa: Hungarian Serenade, Op. 25
I. Marcia
II. Serenata
III. Scherzo
IV. Notturno
V. Danza