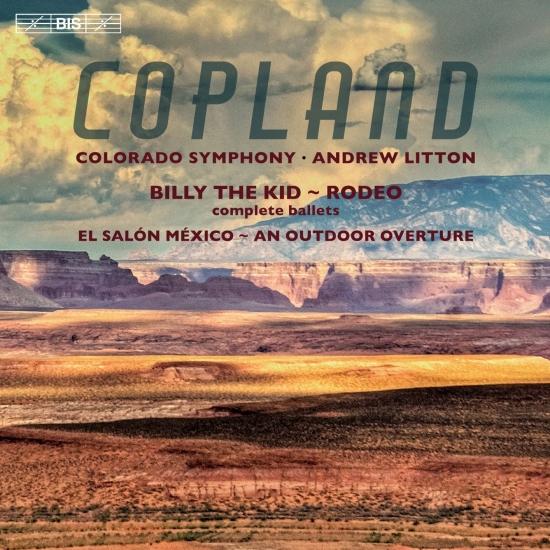 Having taken up the post of music director with the Colorado Symphony in 2013, Andrew Litton has chosen a highly fitting programme for the orchestra’s first recording on BIS: the Wild West, its folk music, traditions and legends loom large in Aaron Copland’s ballet scores Billy the Kid and Rodeo. The two works were the result of the composer’s search during the early 1930’s for a new musical language. Copland himself described his reasons for this as follows: ’An entirely new public for music had grown up around the radio and the phonograph. It made no sense to ignore them and to continue writing as if they did not exist. I felt that it was worth the effort to see if I couldn’t say what I had to say in the simplest possible terms.’ In the two ballets, this new direction can be felt in the immediacy of the music, but also in Copland’s use of cowboy tunes. A similar approach, but with Mexican themes, characterizes the slightly earlier El Salón México, inspired by a visit to a dance-hall in Mexico and the atmosphere he experienced there. Whereas these three works belong to the most popular in Copland’s entire production, the opening piece, An Outdoor Overture, is something of a rarity – especially on disc. Composed in the same year as Billy the Kid, the overture was part of an educational campaign with the slogan ’American Music for American Youth’ and its snappy rhythms and colourful orchestration will have made it as successful in its original purpose as it is here, as a curtain raiser. The Colorado Symphony is obviously enjoying itself in this all-American programme, as is its conductor Andrew Litton, who joins the revelry as honky-tonk pianist in the Celebration section of Billy the Kid and the Ranch House Party in Rodeo, before bringing the album to a rollicking end in that ballet’s closing section, Hoe-Down.
"...this album is a solid account of Copland's music. In all four of the selections, it offers an unabashed slap-your-thigh delivery of many of the idioms through which Copland practically defined "American music..."
"...Litton has certainly teased out many of his music's finer qualities..." (Stephen Smoliar, Examiner.com)
"This is "meat and potatoes" repertoire for a conductor like Andrew Litton, and he doesn't disappoint. He has the Colorado Symphony playing at the top of its form. The Outdoor Overture has both swagger and brilliance, and it never sounds as though it was composed for a youth orchestra (which it actually was). Of course Copland deserves some of the credit for that too, but this doesn't diminish the care and affection that Litton lavishes on the music." (David Hurwitz, Classicstoday.com)
Colorado Symphony
Andrew Litton, conductor 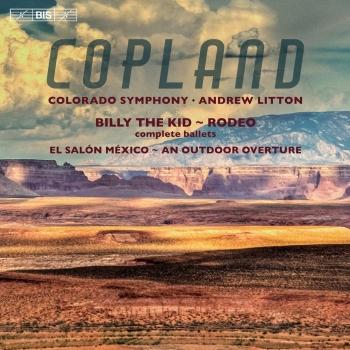 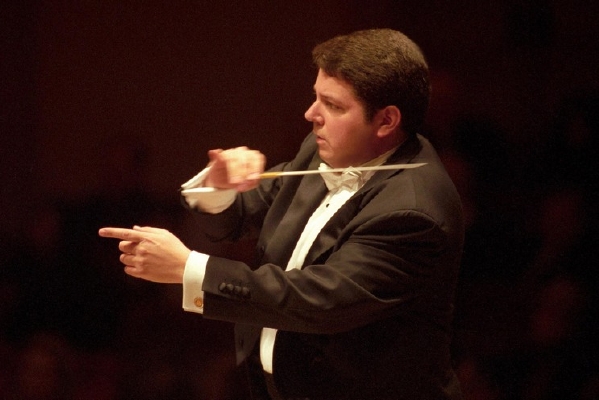 Colorado Symphony
One of the leading orchestras in the United States, the Colorado Symphony per- forms more than 150 concerts annually at Boettcher Concert Hall in downtown Denver and across Colorado. Led by internationally renowned music director Andrew Litton, the Colorado Symphony is home to eighty full-time musicians, representing more than a dozen nations, and regularly welcomes the most celebrated artists from the world of symphonic music and beyond. Every season, the Colorado Symphony serves more than 250,000 people from all walks of life, performing a range of musical styles, from traditional to contemporary. Recognized as an incubator of innovation, creativity and excellence, the Colorado Symphony continually expands its reach through education, outreach, and programming. The Colorado Symphony partners with the state’s leading musical artists, cultural organizations, corporations, foundations, sports teams, and individuals to expose diverse audiences to the trans- formative power of music.
Andrew Litton
music director of the Colorado Symphony since 2013, has held the same position with the Bergen Philharmonic Orchestra (2005–15) and the Dallas Symphony (1994 –2006). He remains conductor laureate of Britain’s Bourne- mouth Symphony Orchestra, whose principal conductor he was between 1988 and 2004. Beginning in 2015 he is also the music director of the New York City Ballet, and since 2003 he has been artistic director of the Minnesota Orchestra’s Sommer- fest. As guest conductor Andrew Litton appears regularly with major orchestras and opera companies around the world, performing at prestigious venues and festivals such as the Metropolitan Opera, Royal Opera Covent Garden, Carnegie Hall, Vienna’s Musikverein and the BBC Proms. His extensive discography has received awards such as the Grammy, Diapason d’Or de l’Année and Gramophone Awards.
Andrew Litton received his master’s degree from the Juilliard School in piano and conducting. He is an accomplished pianist, and often conducts from the key- board and enjoys performing chamber music with his orchestra colleagues. Notable among his recordings as a pianist is A Tribute to Oscar Peterson [BIS-2034] with his interpretations of original Peterson improvisations. In 2011 Andrew Litton was the recipient of the Royal Norwegian Order of Merit in recognition of his work with the Bergen Philharmonic Orchestra.