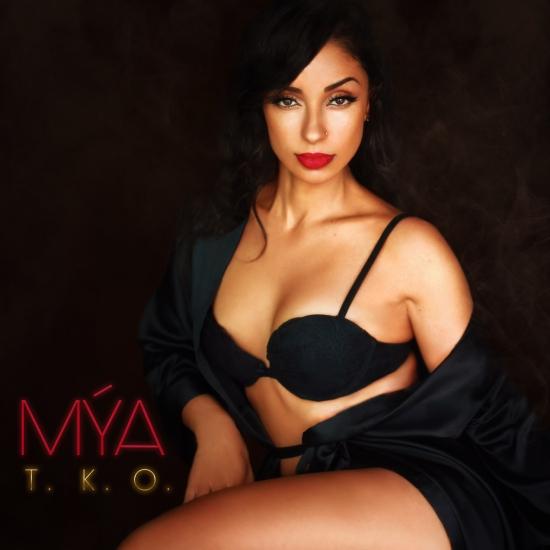 There is no denying that Hip Hop is one of the biggest genres of music right now. However, R&B is still very much alive and well. Let’s take singer Mya for instance. Although many fans have wondered what she has been up to in the last few years, she has never stopped making music. In fact, she started her own label, Planet 9. She is now an independent artist, but she’s been cranking out new music consistently. However, her new album, TKO (The Knock Out), deserves much more than an honorable mention to the contribution of today’s R&B. Mya celebrated the 20th anniversary of the release of her self titled debut album.
Mya definitely put some crafted thought and effort into commemorating her 20 years in the music industry in style. Truth be told, she has never really received the credit she deserved. She was one of the premier female artists of the late 90s and early 20s. Her girl next door, shy demeanor coupled with her street edge has given her undeniable appeal and longevity. Her vocals are still very much in tact and physically, she has aged like fine wine. She looks like even more of a knockout now than she did 20 years ago.
Mya’s new 12 song set takes us back to the roots of real R&B. TKO is complete with lush grooves and harmonies that sometimes take us back to early days in her career. “The Fall” takes a page from her hits single, “Fallen”. This version has a heart thumping bass line, with Mya seductively cooing over the track. She even pays homage to the 90s with songs like “Ready (Part III – 90s Bedroom Mix)”, which serves as an answer to R. Kelly’s classic, “Seems Like You’re Ready”.
She’s more aggressive this time around and fully aware of her sex appeal. This is highly evident on the slurred, syrupy groove of “Open”. TKO hits the hardest when she’s exuding her confident, aggressive side on the classic slow jams,”Ready 4 Whatever 2.0″ and the juggernaut, “You Got Me”. The latter is the most infectious track on the album and needs an accompanying music video immediately. Mya experiments with her sound and stretches herself on the island inspired, “Down”. It’s a sound that she pulls off very well. Sultriness aside though, she makes it clear that the simple things are what matter most (listen to “Simple Things”).
Mya purposely leaves no room for vulnerability on TKO (with the slight exception of the album’s closer, “If Tomorrow Never Comes”). For instance, “Knock You Out” turns the tables on the guy as she explains the blow by blow of what she can do in the bedroom. Overall, Mya is more self aware than ever and it sounds damn good. She gave us a glimpse of what was to come with hits like the cleverly boastful Missy Elliott penned hit, “My Love Is Like Wo”. Now, she has continued that trend and turned it up to a more mature notch. Mya deserves the credit and the respect for making such a solid album 20 years into her career.
Mýa Marie Harrison, vocals