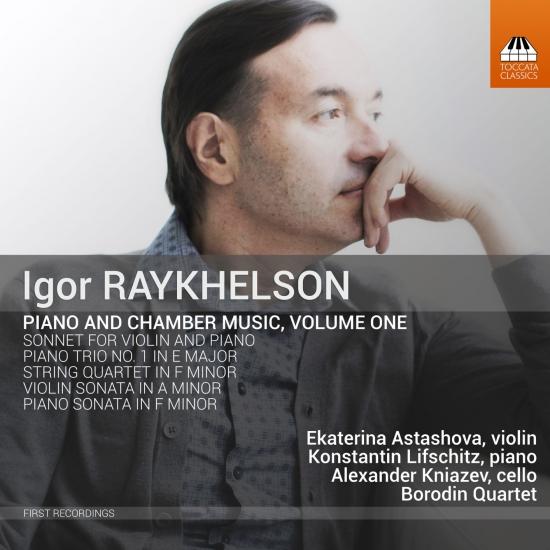 In his early days the composer-pianist Igor Raykhelson – born in Leningrad in 1961, once a New York resident and now based in Moscow – studied both classical and jazz piano. Those influences have combined to create a uniquely personal, Rachmaninov-plays-the-blues Neo-Romantic style: not only is Raykhelson unafraid to write a good tune – it’s clear right away whose tune it is. And in his chamber and instrumental works, the intimate, ‘parlando’ manner that Raykhelson absorbed from jazz becomes particularly effective. This release features some of the leading Russian musicians of the current day: Ekaterina Astashova (the composer's wife) is joined by the cellist Alexander Kniazev, the pianist Konstantin Lifschitz and the Borodin Quartet.
Ekaterina Astashova, violin
Alexander Kniazev, cello
Konstantin Lifschitz, piano
Ekaterina Astashova, violin
Konstantin Lifschitz, piano
Borodin Quartet 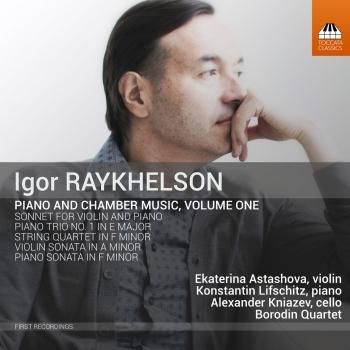 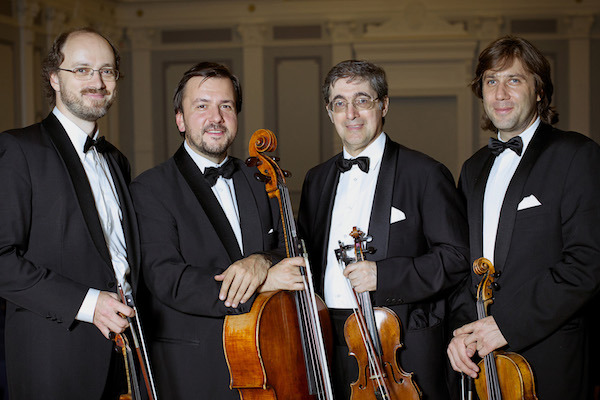 Borodin Quartet
For more than seventy years, the Borodin Quartet has been celebrated for its insight and authority in the chamber music repertoire. Revered for its searching performances of Beethoven and Shostakovich, the Quartet is equally at home in music ranging from Mozart to Stravinsky.
Described by the Daily Telegraph Australia as “the Russian grand masters”, the Borodin Quartet’s particular affinity with Russian repertoire is based on constant promotion, performances and recording of the pillars of Russian string quartet music – Borodin, Tchaikovsky and Shostakovich, as well as Glinka, Stravinsky, Prokofiev and Schnittke. The Quartet is universally recognised for its genuine interpretation of Russian music, generating critical acclaim all over the world; the Frankfurter Allgemeine Zeitung writes about them “here we have not four individual players, but a single sixteen-stringed instrument of great virtuosity”.
The Quartet’s connection with Shostakovich’s chamber music is intensely personal, since it was stimulated by a close relationship with the composer, who personally supervised its study of each of his quartets. Widely regarded as definitive interpretations, the Quartet’s cycles of the complete Shostakovich’s quartets have been performed all over the world, including Vienna, Zurich, Frankfurt, Madrid, Lisbon, Seville, London, Paris and New York. The idea of performing a complete cycle of Shostakovich’s quartets originated with the Borodin Quartet. In recent seasons the ensemble has returned to a broader repertoire, including works by Schubert, Prokofiev, Borodin and Tchaikovsky, while continuing to be welcomed and acclaimed at major venues throughout the world.
The Borodin Quartet was formed in 1945 by four students from the Moscow Conservatory. Calling itself the Moscow Philharmonic Quartet, the group changed its name to Borodin Quartet ten years later and remains one of the very few existing established chamber ensembles with uninterrupted longevity. The world has changed beyond recognition since 1945; the Borodin Quartet, meanwhile, has retained its commitment to tonal beauty, technical excellence and penetrating musicianship. The ensemble’s cohesion and vision have survived successive changes in personnel, thanks not least to the common legacy shared by its members from their training at the Moscow Conservatory. The current members of the Quartet are Ruben Aharonian, Sergei Lomovsky, Igor Naidin and Vladimir Balshin.
In addition to performing quartets, the Borodin Quartet regularly joins forces with other distinguished musicians to further explore the chamber music repertoire. Their partners have included Sviatoslav Richter, Yuri Bashmet, Michael Collins, Mario Brunello, Elisabeth Leonskaja, Christoph Eschenbach, Boris Berezovsky, Denis Matsuev and Nikolai Lugansky. The Quartet also regularly receives invitations to give masterclasses, and to serve as jury members at major international competitions.
Highlights in 2016/17 include performances in London, Lyon, Bilbao, Pamplona, Madrid, Essen, Brugge, Miami, Puerto Rico, Bogotá, Amsterdam, Rotterdam, Budapest, and Moscow, as well as a tour of China; playing quartets of Prokofiev, Mozart, Beethoven, Haydn, Tchaikovsky, Arensky Myaskovsky, Shostakovich – and of course Borodin; and quintets with partners including Alexei Volodin, Michael Collins, Joseph Kalichstein and Elisabeth Leonskaja. Furthermore, the Borodin Quartet joins the Staatskapelle Dresden Orchestra under the baton of Vladimir Jurowski for performances of the Martinu and Schulhoff concertos for orchestra and string quartet.
The Quartet’s first release on the Onyx label, featuring Borodin, Schubert, Webern and Rachmaninov, was nominated for a Grammy in 2005 in the “Best Chamber Performance” category. The Borodin Quartet has produced a rich heritage of recordings over several decades, for labels including EMI, RCA and Teldec, including the Complete Beethoven quartets for CHANDOS. The Quartet will be recording the complete Shostakovich String Quartet Cycle for Decca, with its first release in the cycle being a dedicated 70th anniversary CD (of string quartets Nos.1, 8, and 14), released in March 2015.